Bangladesh is another cause of frustration in South Africa

Despite a great win against England last night, South Africa was eliminated from the T20 World Cup. One ICC tournament after another, South Africa will fail যেন this is the rule, or why the Proteas will not be able to reach the semis even if they win four matches equal to Australia’s in the Super Twelve group this time! 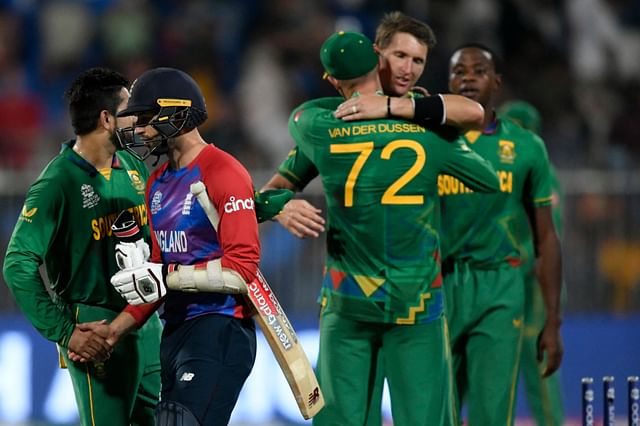 Rain and bizarre rain laws took away South Africa’s guaranteed victory in the semi-finals of the 992 ODI World Cup. Then in 1998, Brian Lara stopped South Africa’s victory in the quarter finals. That haunting moment in the 1999 World Cup semifinals. Lance Klusner and Alan Donald’s last ball to take the winning run to be ‘brain fed’. The next time in 2003, the law of the rain law again in their field. This time, they made a mismatch by calculating the correct calculation in the calculator. The ICC tournament is a curse for South Africa, so to speak, he can’t be blamed too much. After that, in the ODI World Cup in 2007, 2011, 2015, 2019 খ even after playing four more events, Kannai has been a partner of the Proteas.

compared to the ODI World Cup

The T20 Cricket World Cup started in 2006. The story of South Africa has not changed. However, compared to the ODI World Cup, the heartbreak of the Proteas in T20 is somewhat tolerable. South Africa has burned the most in the 2009 Twenty20 World Cup. They lost by 7 runs against Pakistan in the semi-final of the service. Then in 2014 they played in the semi-finals of the T20 World Cup but lost to India by 6 wickets. Apart from this, the pattern of failure in South Africa in 2008, 2010, 2012 and 2016 is the same. Sometimes the Super Eight or sometimes the Super Ten ended their World Cup journey.

South Africa did not have a good start in this year’s T20 World Cup. They suffered bad batting against Australia in the first match, although they fought. But Temba Babuma’s team could not win the match. But then they lost easily to West Indies but they had to win against Sri Lanka in the last over. This time, it seems, Bangladesh has been the biggest ‘tomorrow’ for South Africa. Bangladesh were bowled out for 64 in Abu Dhabi but South Africa could not win the match with the bat. Even if they win by 8 wickets, they will not be able to increase the run rate as expected in the match. After Kagiso Rabada’s hat-trick and a good win against England yesterday, the failure to win the match against Bangladesh easily is coming to the fore.

Bangladesh is another cause of frustration in South Africa

Famous commentator Nasser Hussein mentioned this in his commentary on yesterday’s match. In the end, how well Bangladesh lost was a competition between Australia and South Africa. In that fight, Australia is ahead by a clear margin. They bowled out Bangladesh for 63 and won the match in 8.2 overs. South Africa had to play 64.3 runs in 13.3 overs.

Such a small sigh that South Africa’s eternal partner in the ICC tournament. This is their destiny!